-What is Kindergarten? – my parents and friends asked me this question several times during the last few months. – Is it the same as the preschool in Serbia?

-Well, yes and no – I answered while thinking what do I really know about preschool in Serbia today.

I don’t really even recall my own experience, although I do remember some details: there was a cabinet in which I would put my shoes, a small bed, a break at lunchtime, games, events and field trips. On the other hand, I didn’t know much about Kindergarten until recently. I was surprised when I found out that it was not mandatory in Canada. In Victoria, up until 2011 children only went to Kindergarten until noon, and one Canadian girlfriend told me that back in the eighties she used to only go for a few hours every other day.

I have been preparing for this new experience. I used every opportunity to listen to other people’s observations. What I have come to realize is that there isn’t a parent who doesn’t face uncertainty when it comes to a new school year.

-I have three kids – said one mom whose son is in the same class with my daughter – but I’m excited, as this is my first time! With each child it’s different and I never know what to expect.

Kindergarten is the transition year when children are getting out of preschool and preparing for the first grade. It takes place in primary schools and begins in the first week of September.

In British Columbia, children enter Kindergarten in the calendar year in which they turn five. I used to believe that five-year-olds were too little for such a big change. However, when my daughter turned five, I noticed many changes.

She was showing me that she was ready for bigger challenges: – I want to have a big school backpack – she demanded. – When will I have a chance to ride on a yellow school bus? Suddenly she admired the girls who were sitting alone in the library and studying. Also, she couldn’t help watching the children who came to the beach one day on a school field trip.

Even our conversations changed. What’s life like on other planets? Why do some people dress differently than us? Who made all of the countries?

Once, she interrupted me in the middle of our discussion and asked something off topic:

-Now you said the word memory. What is the memory?

In early August, the first week of summer vacation, she expressed her feelings through art. She brought her painting to my table and said:

-You need to write down something for me – I had to also add all the names of her preschool girlfriends.

(translation: My world is wonderful. I love being a small but I am hardly waiting to become a big girl)

My introduction to Kindergarten began prior to enrollment for the following school year. In January, parents were invited to a school district meeting at a nearby high school.

We all gathered in the gym where we first followed the presentation. Employees of the Ministry of Education were passing on basic information about necessary documents for registration, catchment areas, English language programs vs. French Immersion, the procedure parents need to follow for transfer to another school and so on. Although this data had not changed much over the years, and more or less was the same in many countries of the world, parents were overwhelmed with the information. Despite the good preparation of the speakers, we had that evening more questions than answers, and not enough time to work them all out.

I was waiting with interest for the second part of the evening. This time was scheduled for information on Kindergarten readiness.

Educators designed and offered seven interesting presentations – early literacy, English language learners, play within the Kindergarten environment, fine motor skills development, speaking and listening, early numeracy, and social-emotional learning in the early years. According to their own needs and interests, parents were able to pick four presentations. They were held in separate classrooms, in which we would move at the sound of the school bell. Each lasted fifteen minutes and briefly spoke about what is to be expected for the children to know when entering Kindergarten. 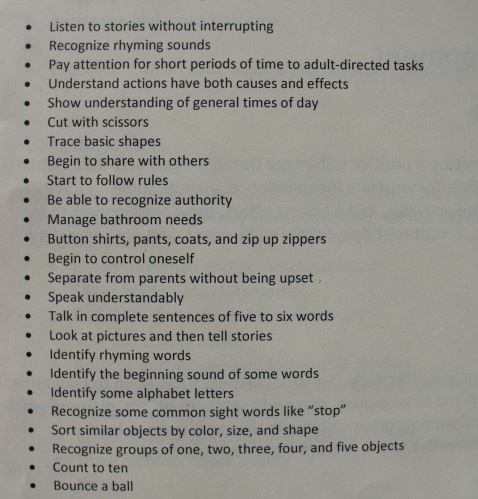 I had confirmation that my daughter was on a good path and also advice on how to help her move forward. There were some practical activities for developing good communication skills, a list of picture books we could read that illustrate the emotions children now experience, and also ways that we can extend our everyday games.

Just a month after, all the confusion and worries were behind us. We then started to get to know more about our new school.

I will remember our first school meeting forever. That day I was dealing with two challenges, the excitement of my daughter and the unexpected weather of a harsh winter day.

Upon entering the school parking lot I was welcomed by the principal:

-Thank you for coming – she pointed the way to some extra parking spots.

I smiled at her words. For a second, I thought that no one would believe me if I told this situation was going on in February in the mildest city in Canada, that rarely gets snow.

-When we saw snow this morning – she sounded really concerned – we could only hope that people would show up.

The idea of this night and the next school meeting was to acquaint students and parents to the new environment. We again gathered in the gym and, this time with the words of the principal, we met with the rules and regulations of the school.

Both my daughter and I had a lot of work to do. I filled out forms; spoke with representatives of the parent’s council, a nutritionist and a public librarian. I went and looked at uniforms and planned out what I would need to buy.  During that time, my daughter visited the Kindergarten classroom and met with teachers. She enjoyed well-planned activities like painting, counting, cutting, and reading.

I realized just how useful those meetings were in September. The first day of school my daughter showed no fear at all. She knew where she was going and already felt connected with the new world. She was excited, with the first school bell she put on her backpack and walked into the building smiling and waving.

My daughter’s Kindergarten classroom is like many schools in Serbia and around the globe.  Space, where the kids are spending their time, is full of colors, drawings, books, various shelves with containers and materials. The classroom is divided into several eye-catching units equipped for different activities. In front of the whiteboard is a colorful rug where children sit reading stories; in the middle of the room, there are small round tables that students use for writing and drawing. Tucked in the corner, next to the shelf for food storage, is a place for free play. For those who don’t have a child in the house, the classroom can sometimes look crowded and chaotic. But its every nook is well planned out and organized. Children are seeing it as if it’s a playground, they know exactly where and what they can play. 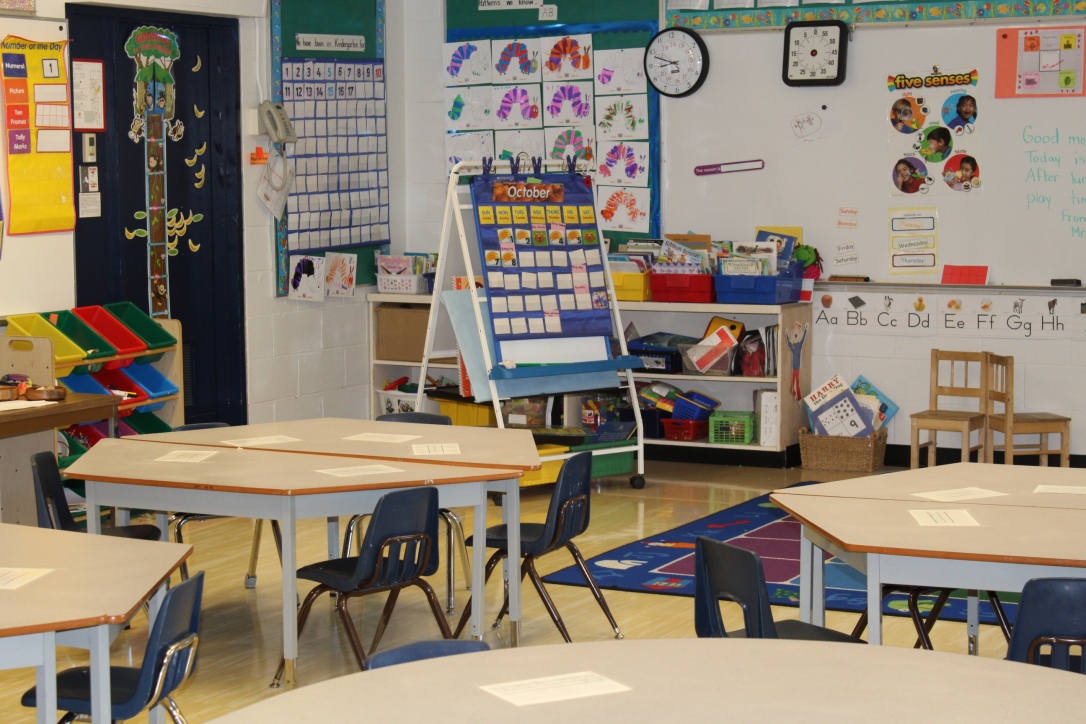 The same can be said with time. One morning I took a long time to say goodbye to my daughter. Some children used the moment to take me through the classroom. They showed me the tables with their names, the calendar with their birthdays, their cubbies. In the end, they pointed the magnets on the board, which recorded the schedule of their daily activities.

Every morning, at the front door teachers are welcoming children to their classrooms and at the same place in the afternoon they send them home. My daughter really likes her teacher. I decided not to tell her she would probably have another one next year. While in Serbia I had one homeroom teacher for four years, here in Canada it is different. There are Kindergarten teachers, then first-grade teachers, second, third and so on. The teachers change from year to year, as well as the makeup of students in the classes, all the kids will be split up in different classes each September.

Despite the constant changes, the school operates as a small community. Students, teachers, and parents are all bound to it. I believe the key for that is in the great interpersonal communication and regulated relations within classrooms, and between teachers and parents.

In just one month I’ve noticed a lot of good examples. Here are a few interesting ones:

First, all Kindergarten students have a Communication book. The blue-yellow folder book is sent daily from the hands of teachers through school bags to our home and back. Every day, in two or three words I can find out what they will do in class the following day, as well I can get information about upcoming activities. It helps me get insight into what is going on in the school, and also how to help do my part of the job at home.

The second example is in play. I see it as a very useful practice for life. Every day, one student is chosen to be a leader. That day he or she assists the teacher and leads other students. The leader is the first in line, the one who announces the day, month, checks the weather outside etc. The next day another child is taking the role and others are relying on their leadership. From the very first day, and without discrimination, every child has the opportunity to be in the shoes of both the leaders and followers and to experience their different roles and responsibilities.

The third example includes the whole school. Under the supervision of the assistant teacher students from senior classes are coming to the Kindergarten classrooms during lunchtime. The seniors are helping the children with their lunch containers, getting indoor/outdoor shoes and coats on to prepare for recess. Sometimes, if they have time, they even read books or play with them.

The first day when I picked up my daughter from school, I asked her many questions.

All she was willing to talk about were the big girls.

-Lucy and River took us out.

-Monitors – she said and woke up my curiosity.

Not only did I not know about monitors, but I also couldn’t even pronounce the word monitor in English like her.

-What are the monitors? – I asked and from her story, I was getting more than the answer. I start discovering a new world myself.

View all posts by natasacecezsekulic