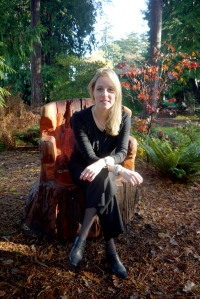 Nataša Ćećez-Sekulić was born in Belgrade, Republic of Serbia, Europe.

She comes from a tribe of searchers, those who long to take different paths in life. They need to venture, explore and experience everything which comes their way before they stop and realize what it is they want to devote themselves to.

Since she could remember she was transforming the experience of the world and reality into stories, most of the time through lively and joyful oral narration. The impulse to write down her own story appeared suddenly and she followed it without knowing in which direction it would take her. She discovered in this endeavor that it’s true what they say: we’re not the ones writing the story but it is the story which creates us. She was grateful for every moment of this process, mostly because, in the end, she felt she was finally coming home.

Her book in Serbian language (Danas nam je divan dan) was an inspiration for her to start this blog.

She lives with her family in Victoria, Canada.

( – completed University of Belgrade where she got degree: professor of Serbian language and literature

– in 2018, she wrote and self-published her memoir in Serbian language: Danas nam je divan dan

– in 2018, she started a blog and published stories in both languages (Serbian and English)

– in 2020, she created a global online conversation Liminal World with the wish to connect with people from all over the world, hear about their current experiences and get to know them better. Instead of waiting for the new world to unfold on its own, she decided to create one by planting a seed of the world she wants to see us all living in: a world of mutual respect, acceptance and understanding

– in 2021, she (re)wrote and self-published her memoir in English language: The Journey to Bring Back Play

– as a volunteer she is involved in the local school community).